Olympian 325 was unveiled today in its all-over wrapped advertisement for the new look Gazette newspaper. The first copies of The Gazette rolled off the presses on April 3, 1873. In the 140 years which have followed The Gazette has gone from strength to strength. The newspaper has gone from a weekly to daily, changed size, moved offices and had several owners. The new look Gazette has several exciting new sections, including today’s community news pull-out, revamped entertainment and sport offerings as well as new platforms for junior  reporters, columnists, readers’ letters and nostalgia. 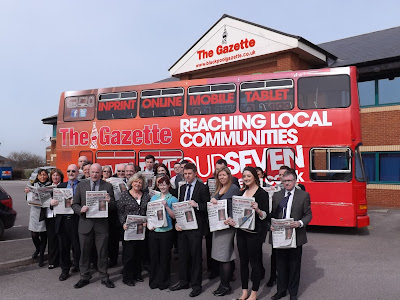 325 has a busy week ahead on promotional work for the Gazette but it will then be scheduled for a 6-7 day week on services 12, 22, 72 & 73. Classic Bus North West are very proud to be working in conjunction with the Gazette to promote their new look local newspaper.
Posted by PKH at 09:48